The ecommerce landscape has experienced a multitude of changes in 2021, and Q3 was no exception. As questions about the COVID-19 pandemic seem to grow and answers seem to shrink, consumer buying behavior continues to fluctuate – and marketing strategies have to change in tandem.

But keeping up with the digital landscape can feel like running through an endless maze of possibilities where the path you’ve chosen may change at any moment. How can you feel confident that you’re making the right decisions about your brand’s digital marketing strategies?

100% certainty is almost never possible in life, but being up-to-speed with the latest news and data about the world of online (and offline) advertising will give you a strong foundation for your decision-making.

Here are some of the top ecommerce stats and headlines we found from Q3 2021 to give your brand the knowledge you need to empower your strategies for success moving forward. 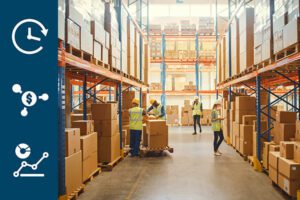 Business being good isn’t always a good thing. Shipping, inventory, and fulfillment are the basic underpinnings of a business that must work flawlessly for marketing & advertising to be worth it – and they are all in flux right now.

We keep this blog post updated with the information you need to stay in the loop with the supply chain crisis. Read the latest news today & bookmark this article for easy access to stay informed!

Walmart’s on a Roll

Where Brands Are Spending Their Ad Dollars

Influencer marketing spend will surpass $3 billion for the first time this year and is expected to reach the $4 billion milestone in 2022. Spend will see higher growth this year at 33.6% after last year’s 14.4% growth. Read more. (eMarketer)

As social commerce continues to grow as an effective way for brands to reach consumers, Instagram is beginning to test ads in the Shop tab. The ads will appear as tiles just like the other photos on the page. Read more. (Ad Age)

Instagram says that it is “no longer a photo-sharing app” and will instead focus on creators, video, shopping, and messaging to both compete with YouTube and TikTok as well as lean into the trend toward ecommerce. Read more. (RetailDive)

TikTok is upping its social commerce game through a new partnership with Publicis that will focus on creating a new kind of shopping culture on TikTok that helps brands tap into emerging shopping trends. Read more. (MarketingDive)

How Consumer Shopping Habits Have Changed

Clothing, electronics, and furniture are the most common items purchased through buy now, pay later (BNPL) options. While consumers enjoy BNPL for its ease of use, flexibility, and low interest rates, 57% say they regret using BNPL because it was too expensive. Read more. (C+R Research)

YouTube Premium subscriptions are projected to be up 18% year-over-year in 2021 after growing 34.6% in 2020. The number of subscribers is projected to reach 23.6 million this year and approach 28 million by 2024. Read more. (eMarketer)

Users are increasingly subscribing to paid digital audio platforms like Spotify Premium and Apple Music, with the number of subscribers expected to hit a record 121.9 million by the end of 2021. That’s 5 million more than what experts projected at the beginning of the year. Read more. (eMarketer)

61% of consumers have purchased a new product because of the brand’s sustainability practices, with 16% of shoppers strongly agreeing that they regularly opt for more expensive products that are more sustainable. Read more. (Stifel)

The top three US retail companies seeing ecommerce growth in 2021 are Etsy, Walmart, and Chewy, with Amazon placing fourth at 24.9% year-over-year growth. Target comes in at 12.5% growth while Best Buy has seen a 3.1% decline. Read more. (eMarketer)

Third-party cookie deprecation has been delayed until mid to late 2023 after an announcement last week from Google. Previously, Google planned to phase out third-party cookies running on Chrome in early 2022. According to Google, “more time is needed across the ecosystem to get this right.” Read more. (Google Chrome Blog)

40% of back-to-school shoppers planned to spend more money this year than last year. It’s estimated that 59% of shopping was already done by the end of July, with 48% of shoppers spending the most money in mass merchant stores. Read more. (Deloitte)