Digital Marketing Through the Years

Digital marketing has come a long way since the term was first used in 1990. The landscape has almost completely changed in those 30 years, with revolutionary developments in mobile, social media, and artificial intelligence introducing entirely new ways for brands to market products.

To put it simply: Everything has changed.

The first decade of digital marketing’s life truly set the stage for success. Between the birth of Amazon, internet reaching mobile phones, and the launch of the first-ever mobile marketing campaign, digital marketing would be nowhere without the initial innovations that occurred up until the new millennium.

Of course, some of the most significant changes have been pioneered in the most recent decade or so. It’s barely been 12 years since the first online purchase was made on a mobile phone, and it’s been barely four years since ads launched on Snapchat and Spotify.

Developments in artificial intelligence and machine learning will shape the future of digital marketing in ways we can’t yet imagine – just like we couldn’t imagine that when Amazon launched in 1994 as an online bookseller, it would come to dominate American ecommerce, or that mobile would come to exceed PC internet usage less than 20 years after internet reached phones in 1996.

We’ve broken all of these digital marketing developments down into some of the most crucial to give you a brief history lesson on the industry that has defined how brands do business today. (Click the image to enlarge.)

Want to learn more about recent developments in the digital marketing world? Check out some of our resources below! 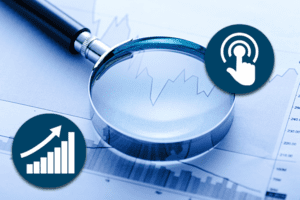 Don’t miss our upcoming webinar focused on Paid Search data from more than 300 brands and nearly $400m in ad spend!

Paid search revenue was up 101.3% YoY at the height of the pandemic in 2020. The most unpredictable year since the inception of digital marketing has left many brands and retailers wondering what the lasting impact will be.

Join ROI for this live webinar to uncover 2020’s PPC data and trends and unlock strategies to grow your profitability in 2021.